MBM is able to complete transactions digitally through our chosen e-signature platform, Docusign. Signing documents electronically under Scots Law is completely valid as confirmed by the Law Society of Scotland in its recent guidance (see here). It has actually been valid for many years but it’s not been adopted by the legal profession generally – we would like that to change.

The current law for electronic signatures (or e-signatures) in Scotland is principally found in the Requirements of Writing (Scotland) Act 1995 (“ROWA”) and the Electronic Identification and Trust Services Regulation (EU/910/2014) (the “eIDAS Regulation”), which has direct effect in EU member states and the UK post-Brexit.

What constitutes a contract under Scots law?

Under Scots law, there is no requirement for a contract to be in writing other than where specifically listed in ROWA. A contract can be made orally and is essentially an agreement between two or more parties which creates or intends to create legally binding obligations between the parties to it. Despite the lack of formality required, parities usually want to agree to a document to achieve certainty between the parties regarding the terms and to provide a record of those terms.

Section 1.2 of ROWA states that a written contract is only necessary for the following:

How are contracts executed under Scots law?

ROWA sets out the requirements for how documents are executed under Scots law. Where a contract requires to be constituted in writing under section 1.2 of ROWA, it must be subscribed by the parties in order to be valid. A written contract is subscribed by a party if it is signed by the party at the end of the last page. There are specific statutory rules for subscription and signing by partnerships, companies, limited liability partnerships and other bodies corporate which are set out under ROWA.

Where writing is not mandatory but the parties choose to enter into a written contract, the contract does not require to be probative. If it is signed but not subscribed, the contract can be used as evidence of the terms of the agreement; however, it will not be probative and cannot be registered in the Books of Council and Session (only applicable for certain documents).

This is a broad definition which covers most forms of e-signature from typing your name at the bottom of an email to signing documents via platforms such as AdobeSign and DocuSign.

The eIDAS Regulation came into force on 1 July 2016 and set out three levels of e-signature. These are as follows:

Unlike the eIDAS Regulation, which deals exclusively with electronic transactions, ROWA governs the requirements for written contracts (both paper and electronic) specifically under Scots Law.

Any document which does not fall within the categories of section 1.2 of ROWA noted above can be executed by any form of electronic signature, including a ‘standard’ one. However, for any material documents for significant transactions (eg. investment agreements, shareholders’ agreements or share purchase agreements), MBM Commercial will always use an advanced electronic signature as a minimum.

When e-signing, Scots law documents do not need a witness.The fact that a witness is needed to create a probative wet-ink signature, does not mean one is needed when using e-signatures. After all, the purpose of having someone witness a signature is just to add another layer of evidence. There is now a ‘witness’ who can help prove the document was signed. This is exactly what advanced electronic signatures and qualified electronic signatures do. They provide another layer of evidence. The difference is simply that the evidence this time comes from the use of technology.

Yes, this was recently reconfirmed by the Law Society of Scotland in their guidance.

It should be noted that for an electronic document to be probative (self-proving), it must be e-signed using a QES.However, it is important to remember that ROWA does not require any document to be probative, that is the parties’ choice. Equally, probativity and validity are separate matters. Just because a document is not probative does not mean it is not valid. Probative documents can be challenged just as much as non-probative documents. The only difference is that one has a presumption of validity to start with whereas the other requires validity to be proven.

By using an AES you are ‘validly’ signing the document, and an additional level of evidentiary support should a document ever be contested (although we acknowledge that corporate documents are rarely contested in court and we see this as a minor risk). It is therefore our policy not to seek a QES signature unless strictly required given the additional time and cost burden on signatories. 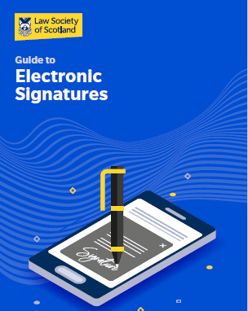